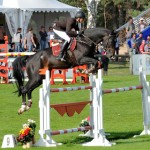 -“ I’ve been paying attention to his evolution ever since I saw him in finals of the 5 years category. I was thinking of purchasing him, but he wasn’t for sale…” emphasizes Simon Delestre, excited by his new acquisition.
“ But then I set up a business in partnership with Geneviève Maigret who was also looking for a stallion for her Haras de Clarbec. Things became much clearer this time around, and we concluded the deal. I’m very happy with it because he’s a very good horse, full of resources and respect, and I wasn’t the only one trying to purchase him. But let’s not rush him, he just got into his 7th year. We’ll take the time to ripen him slowly…”

Simon Delestre can have the same approach on his second recruit, Qlassic Bois Margot. This young son of L’arc de Triomphe and Décibelle du Roc by Galoubet A, is going for his part to his 8th year, and was evolving so far under Benjamin Robert’s guidance. In order to perfect his development, the Haras Bois Margot granted itself Simon Delestre’s skills.

-“It’s also a horse I appreciate since a while. He has style, and a move worthy of the best. I would’ve liked to purchase him but Rodolphe Bonnet thought it would be best to entrust me with him while keeping him for the development of his stock. I fully understand him and hope I’ll be able to give him satisfaction with good results. But again, we’ll have to take the time to perfect our relationship, even though I already appreciate him a lot.”

All of this seems plenty enough to prepare the future. All the more since Simon Delestre still has work to do with horses! We’ll indeed see him again next week at the CSI 5* of Basel with Napoli du Ry, Valentino Velvet and Whisper.