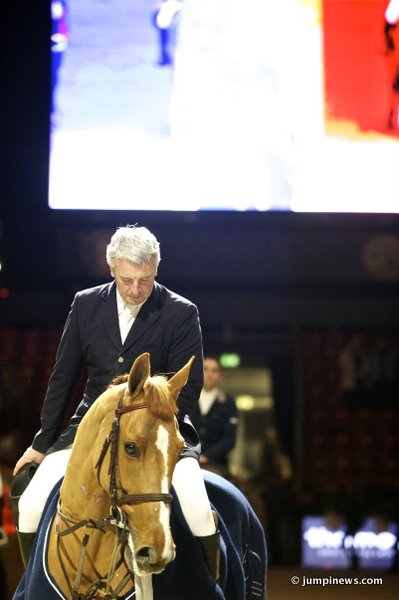 Bost and  Cosma on the French hymn!

Philippe Rozier can’t believe it! – » Losing in Basel against a guy from the Seine et Marne… ; it’s nonsense! » he added ironically in front of his friend Bosty. The rider from Bois le Roi did believe his 1st victory was at hand this time, after he had reached the 2nd place during the Opening Event. Furthermore, Rozier was in the spotlight since he got to the 9th place with his Idéal de Roy, and this couple is not used to failing this kind of race! It’s only after thirty riders had passed that we got to see the chronometer under 54’94.

With his legendary determination, Bosty led Castle Forbes Cosma on the wisest way on which Couleur Rubin’s son was releasing all his energy. The Basel Crowd, who came massively was glad to see this winning formula, which was highly encouraged by the generous applause! It is a great victory for Bosty : « He really was enthousiastic and offered me great jumps. He comes back in competition Since Paris and showed great results in La Corogne. He has a heart and a genuine fighting spirit : evrything I like! And the applause from the Basel crowd are really nice to hear !”

The Swiss public got itself another round since Werner Muff took the 3rd place with Unik GS (Hartbreacker), followed by Arthur Dasilva in 4th position with Virginia II, and Steve Guerdat who closes the Helvetian table leading his Sydney VIII to the 5th place.